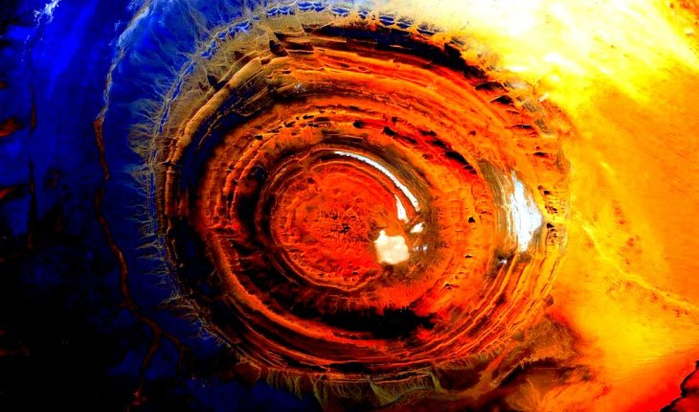 The most extensive warm desert in the world is the Sahara. With more than 9,065,000 km2 of African territory, it occupies a space similar to that of China or the United States. And this desert is the cradle of many hidden things and incredible secrets. One of these secrets is the richat structure, also called The Eye of the Sahara.

Although the Sahara has infinite routes and thousands of years of travel, it was not until 1965 when it was discovered The Eye of the Sahara. The late discovery is due to the fact that this landscape can only be seen from space. And even today, the Eye of the Sahara It remains a mystery that relate to ancient Atlantis.

The discovery of the Eye of the Sahara

On a space mission two astronauts from the United States discover a strange terrestrial structure that they called The Eye of the Sahara.

In 1965 NASA sent a space mission called Gemini and manned by James A. McDivitt and Edward H. White. This would be the first spacewalk for an American astronaut. They were the ones who made the amazing discovery. Their eyes did not believe what they saw when they looked towards Earth.

In all the center of the largest desert in the world, yes, in the center of the Sahara a strange place appeared, which looked like an enormous eye and of which nothing was known on Earth. At that time they made the great discovery of this mysterious terrestrial structure.

This amazing place is located in Oudane, a city in Mauritania, but it is so immense that it can only be seen if you are in space. The structure has circular spiral shapes with almost perfect lines and measures over 50 km in diameter.

Origin of The Eye of the Sahara

Since its discovery, numerous scientists have focused on the study of such a strange geological structure. But none of them has been able to find the explanation of its origin.

Theories about its formation

Initially, several theories pointed out that could have originated from a large impact, possibly from a large meteorite, but several investigations brought this theory to the ground. Later it was thought that its origin could be related to erosion.

It is believed that the passage of time has generated this huge huge anticline formation. In this sense, some rock remains located there are known to be 2.5 billion years old.

Other studies found that it also contains an enormous amount of limestone and dolomite. These rocks are made of basalt and other types of volcanic stones. They have also found gas and oil reserves underneath the gigantic structure.

The mixture of all these materials causes a spectacular view to be generated from space. And it is that the place experiences different color changes according to the season and the time of day when it is sighted.

Will it be Atlantis?

This finding has also spawned other theories. For example, some people think that this incredible structure It could be the lost city of Atlantis, the mythical island mentioned by the philosopher Plato in the texts of his work Timaeus and Critias.

Since Plato claimed that Atlantis was something real, different scholars and researchers have been searching for this mysterious island. So some experts now think that the Eye of the Sahara It could very well be the mysterious lost island of Atlantis.

This theory is more feasible given that some studies have already concluded that the Eye of the Sahara It was an island more than 5,000 years ago. Furthermore, his appearance might fit with some descriptions made by Plato. But until now no one has been able to find the location of Atlantis.