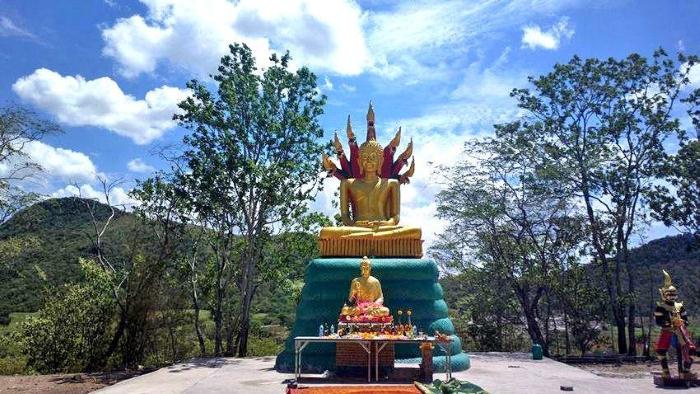 On a hill known as Khao Kala, in a mountainous forest reserve in central Thailand, near the town of Nakhon Sawan, large groups of people climb a large Buddha statue at the top of the hill, where they report seeing some UFO hovering over the hill.

Khao Kala is three hours by train north of Bangkok. Pilgrims who regularly gather there claim that the UFOs are of extraterrestrial origin and come from the former planet Pluto and that they send them telepathic messages.

ETs are said to be thin beings with silvery-looking skin. They travel in spaceships through a wormhole or Stargate that ends just above the Buddha statue where boats are seen spontaneously appearing and disappearing.

Plutonians telepathically warn of environmental disaster or a nuclear war if humanity does not put its internal affairs or problems in order. ETs are concerned that a disaster on Earth could impact Pluto as well. They also want to help Earth survivors rebuild human civilization in the event of a massive extermination.

By 2019, the rallies at the top of Khao Kala had gotten so large that the government petitioned the courts to ban mass gatherings in the area and tried to stop more groups from going there. Many UFO enthusiasts who gathered in the area were confronted by police and forest officials.

The gatherings at the Buddha statue in Khao Kala began in 1997 when retired sergeant major Cherd Chunsamnaun was at his home, immersed in Buddhist meditation, receiving mental messages from Plutonian extraterrestrials. Cherd’s daughter Wassana mocked him and told him to “tell the aliens to show themselves.”

The next day, the daughter saw her brother and brother-in-law “being ripped off the living room sofa and spinning simultaneously, like whirling dervishes, out of the house and into the yard.”

When Wassana saw her brother and brother-in-law spinning like tops in the garden, she called her sister, Nurse Somjit. When Somjit arrived home, her husband Charoen Raepeth told her that he had lost control of his body and turned to the courtyard of the house where he was shocked to see a UFO in the sky above.

“I saw a large round flying object with a bright orange light in the center and many other smaller lights circling around it,” Charoen said.

The sisters looked at each other and said, “That’s right.” Both quit their nursing jobs to support extraterrestrials while their father continued to receive telepathic messages over the years.

“Before my father died (in 2000), he taught us how to communicate with aliens, ”Wassana said.

Today, he claims that more than 100 other Thais have developed the ability to communicate with ETs as well.

In the 1950s, Dr. George King founded the Aetherius Society after receiving telepathic messages from an extraterrestrial. According to King, ETs were also very concerned about humanity’s use, testing and production of nuclear weapons and the direction humanity was heading on Earth.

But as former Canadian Defense Minister Paul Hellyer said, “Decades ago, visitors from other planets warned us where we were headed and offered to help. But instead, we, or at least some of us, interpreted their visits as a threat and decided to shoot first and ask questions later.“.

It is a matter of public knowledge that UFOs have been seen many times hovering above nuclear missile storage facilities, when missile launching capabilities were inexplicably shut down.

In March 1967, witnesses saw a colorless red and glowing UFO hovering just outside the front gate of Malmstrom Air Base in Montana, a USAF nuclear missile launch facility. According to USAF captain Robert Salas, all nuclear missiles have shut down and died completely, possibly deactivated by ETs.

A declassified report from the Air Force Nuclear Weapons Center in June 1959 revealed how seriously the US government wanted to detonate a nuclear weapon on the moon. USAF Colonel Ross Dedrickson, who also worked extensively with the US Atomic Energy Commission, said he had learned “of incidents involving nuclear weapons.”

Apparently, in the late 1970s and early 1980s, the US military “attempted to put a nuclear weapon on the moon and detonate it under the guise of scientific measurements and other things, which was not acceptable to extraterrestrials, ”Dedrickson said. “They destroyed the weapon before it reached the Moon… And this is their main concern, to preserve the integrity of the Earth, because (also) it affects their own system….

In 1977, on a British newscast, there was allegedly a “forced” broadcast by an extraterrestrial named Vrillon. The message was a warning to the people of Earth to change our ways before destroying the planet.

In 1994, more than 60 children in a Zimbabwean school telepathically received the same messages of the planet’s imminent annihilation if we don’t change our ways of living and waging war.

Harvard psychiatrist John Mack investigated the case and confirmed that all schoolchildren shared the exact same experience and drew the same pictures of extraterrestrial beings who communicated to children that we need to change our ways of living on this planet.

In this article:Buddhist Aliens, Thailand