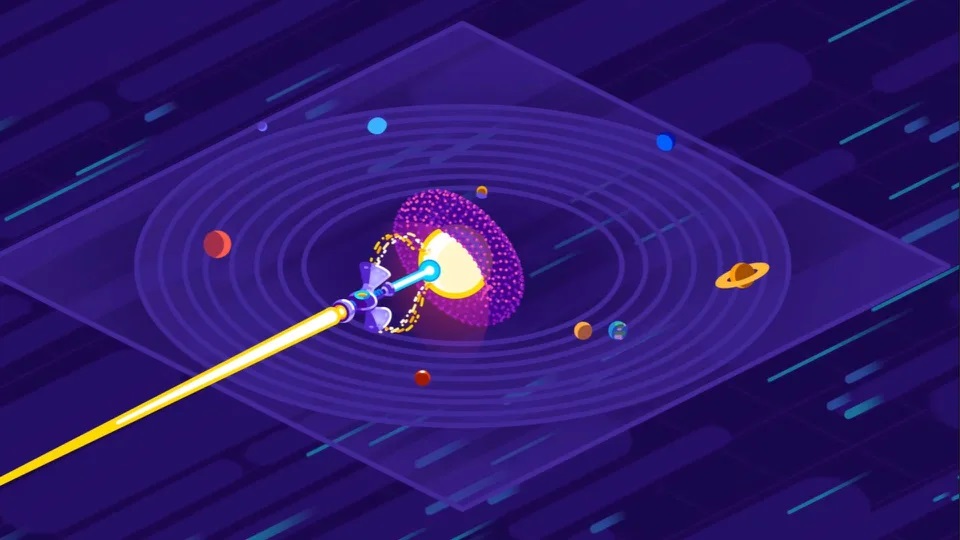 “Stellar engines, megastructures used to control the motion of a star system, may be constructible by technologically advanced civilizations and used to avoid dangerous astrophysical events or transport a star system into proximity with another for colonization.”

That’s probably the easiest-to-understand sentence in the entire scientific report. Fortunately, a German design studio called Kurzgesagt – German for “In a nutshell“ – has released an animated YouTube video explaining Caplan’s stellar engine in a way the rest of the world can understand. The real question is, after watching the video and attempting to read the paper, can the rest of the world – or anyone in the world or universe – build one?

“Stellar engines are a class of hypothetical megastructures which use a star’s radiation to create usable energy. Some variants use this energy to produce thrust, and thus accelerate a star, and anything orbiting it, in a given direction. The creation of such a system would make its builders a Type-II civilization on the Kardashev scale.”

Wikipedia points out that developing a working stellar engine to move the Sun – dragging the solar system behind it – out of the way of a rogue supernova – would bestow on its inventors the title of “Type-II civilization,” which Soviet astronomer Nikolai Kardashev defined as a civilization that can use and control energy at the scale of its stellar system. For comparison, our current civilization (us) is nowhere near Type-I — a planetary civilization capable of using and storing all of the energy available on our planet.

A look at how a Shkadov thruster would move the sun.

Wait a minute, you say, what about that guy Matthew E. Caplan? Didn’t he develop a plan?

Yes, he did. And in fact, his “Caplan thruster” uses something that has been proposed as an explanation for those blinking or dimming stars, like Tabby’s star, that astronomers have been discovering with greater frequency – a Dyson sphere cluster. Caplan first considered a giant solar sail which would passively move the Sun via its own solar energy. However, “At full throttle, the solar system could probably be moved by about a hundred light-years over 230 million years” – too slow to save the Sun and solar system from most catastrophes. For that we’ll need a star-sized Brussard ramjet – a fusion rocket which compresses hydrogen from massive electromagnetic fields until thermonuclear fusion occurs, causing energy to blast out of the exhaust, thrusting the Sun in the opposite direction at a speed of 50 light-years per million years – fast enough to save civilization – provided it survives the move.

That doesn’t sound too complicated, you say, so when can we start building a Caplan thruster … just in case?

Matching our latest video, we designed a poster on Stellar Engines. Go check it out here: https://t.co/5ZLTvFdBrU pic.twitter.com/TxIy4AnCtM

Well, the Brussard ramjet – despite approval by great minds including Carl Sagan – is still theoretical. The magnetic sail is also theoretical, but much closer to reality. And the Dyson sphere or star-circling cluster of electromagnetic-energy-collecting mirrors is a daunting project for a civilization still struggling with solar energy panels.

However … if a dimming orb like Tabby’s star is already surrounded by one, that means a Type II civilization already exists in a nearby solar system and, upon seeing our potential demise, it might come over and build one for us in a galactic-sized barn-raising or “help us move our apartment” kind of way. How much beer and pizza would that cost us?

So, what does our Type .0001% of I civilization have to save our sorry butts from a supernova apocalypse? A possible but far from plausible theory. An excellent design paper and entertaining animation to help us. And two great names for bands – the Caplan Thrusters and the Brussard Ramjets.

In this article:Dyson sphere, stellar engines