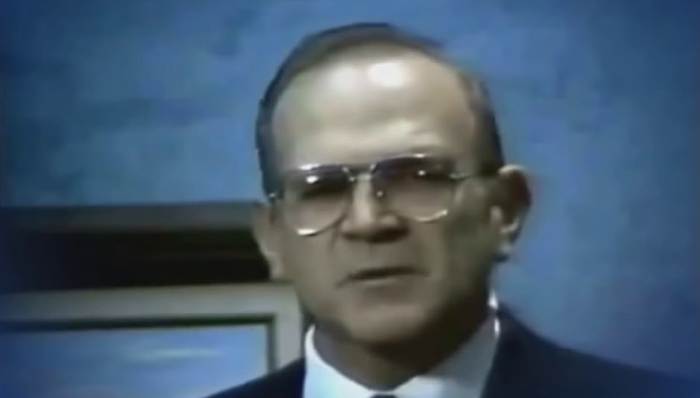 Galen Winsor was a nuclear physicist who has spent many years designing, building and operating nuclear power plants in the United States, with more than a dozen projects to his credit. In the final phase of his career, Galen Winsor worked as a government official at the Hanford Nuclear Site, overseeing the storage of nuclear fuel. However, after retiring, he suddenly began to do unthinkable things.

Winsor’s main activities were public lectures, for which he traveled all over the country, radio appearances and even the filming of mini documentaries in which he tried to tell Americans about a global conspiracy in the world nuclear industry.

The task of the conspiracy is to intimidate people with radiation as much as possible so that a small group of unknown persons can freely dispose of the most valuable energy resource in the world. And so that the word does not disagree with the deed, Winsor made an amazing film reflecting his lecture, recorded in 1986.

In this and other similar videos, Winsor pours enriched uranium into his palm, after which he eats it all, as well as drinking water taken from the pool to cool nuclear fuel. Moreover, he even swam in such pools, washing off the radioactive dust in the column of which he stood, burning pieces of plutonium in front of the camera.

In addition to such demonstrations, while building his house, Winsor poured so much radioactive material into the concrete that the Geiger counter broke from overload when approaching the building. And despite all this, Galen Windsor lived to old age in good health, dying at 82 from natural causes for his age, not related to radiation.

“What is the global uranium conspiracy for? “ asks Galen Windsor. And he answers it:

At its core, federal nuclear material control law is about maintaining power and controlling the masses by eliminating self-sufficient energy sources. Obviously, if someone had a small source of energy that was cheap and efficient, that person would be independent, they would not need to be connected to some kind of “power grid”. The power grid is not a power supply system, but a real control network that our rulers use to keep us in line.

Galen Windsor gave an example with simple nuclear waste, of which kilotons have been accumulated in the world. At the same time, each ton costs 10 million US dollars at 1986 prices. They can be used to recycle fuel uranium, but the precious isotopes are deliberately kept underground, thus creating exorbitant prices for nuclear fuel on the world market.

To this we must add a planetary cut of the dough for the “burial”, “transportation” and “storage” of nuclear materials, which could well be transported by conventional transport and stored in conventional buildings. But instead, the government drills basalt holes for them, and in the process, a lot of money evaporates.

However, the most important thing is that not even highly enriched uranium, but all this nuclear waste, through thermionic conversion, back in the mid-1950s, could be turned into relatively eternal portable sources of free energy, one of which would be enough for the entire life of one average American family. Such sources feed the navigation network of US submarines for years, which would be enough for 50 years of lighting and heating the house, the operation of washing machines, televisions and refrigerators. But then people would become independent of energy companies, which is unacceptable for any government.

Many people believe that nuclear power plants built everywhere are nothing more than dummies. In reality, there is some small secret device inside the power unit, which produces electrical energy, part of which is used to boil the “cooler” and spin fake “generators” and “turbines”. No one can prove that this is exactly what is happening at the nuclear power plant, since even the personnel go there only where they are allowed according to the admission rules, which gives rise to conspiracy theories, but it is possible that Galen Winsor sheds also light on this situation.

The second interesting point in the light of the uranium conspiracy is the control of the state over such a resource as mercury, the danger of which is not only exaggerated, but sucked out of thin air. Mercury can be drunk, which was actively used in the 19th century to treat intestinal obstruction. And yet, the free circulation of this metal is prohibited even in North Korea and Honduras. The question arises: why?

We do not know the answer to this question. But what we do know and what Galen Winsor said absolutely correctly – the state needs complete control over the herd and the main tools of control are energy and food.

Thus, although we can neither refute nor confirm the nutritional value of enriched uranium, we know one thing for sure: there have been no portable sources of cheap energy in this world for a long time, no, and, most likely, there will not be for a very long time. And what is most surprising: all the governments of all countries are at the same time on this issue, as if some other government controls all these governments.

In this article:nuclear energy, Radioactive dust