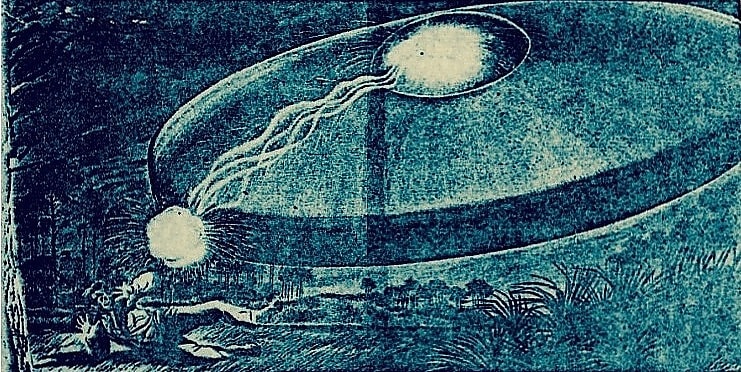 If you ever wondered if the show, “Project Blue Book”, premiered on January 2019 is a work of fiction, let us quickly assure you that it is not. In fact, what this show is based on is a true story of a government project that was carefully swept under the project. The project, as you might well know, is the Project Blue Book.

What you may think you know about this project might not be completely true. However, we shall now try to delve into what really happened with this investigation, what its mission is, and why it had to be aborted and kept classified for a long time.To go back to the beginning, we have to head as far back as 1947. This was just as the cold war was starting. There was suspicion in the air, and there were many reasons for this.So, when a businessman and pilot known as Kenneth Arnold made a report on June 24, 1947, it quickly raised the fever.Kenneth’s report was clear and direct: He had observed nine flat disc-like aircraft near Mt. Rainer, Washington. They were flying at incredibly high speed.

His description of them was so vivid and the press, who quickly dubbed those aircrafts as “flying saucers,” was the beginning of thousands of other similar reports. 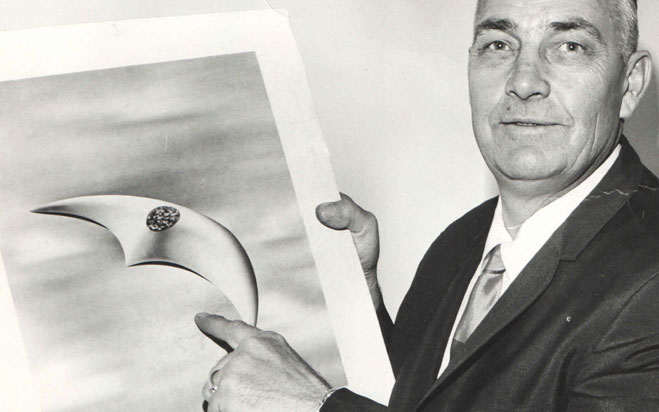 Kenneth Arnold, shown in 1966 with a drawing of a flying saucer, reportedly spent “many long hours of fruitless flying with a camera, trying and failing to find anything like his saucers again.” (AP)

In fact, between that first incident in 1947 and when Project Blue Book was terminated in 1969, a total of 12, 618 sightings of strange things moving in the sky had been reported across the United States.

When the Project Blue Book was carefully shut down, the U.S. Air Force gave a number of grounds that have since been its official stand:

This is part of the official statement, but a lot more was involved in the case of Project Blue Book. So, why would the U.S. Air Force do that?

Was Project Blue Book a failure or was it just a fluke? There are a number of things to note.

Keep in mind that the U.S Air Force is the agency in charge of the surety of the airspace all over the nation.

It was at the beginning of the cold war when reports started rolling in. The initial reaction was a bit frantic at first. There were suspicions about which country may be responsible.

Many suspected that these strange aircrafts could be from the Soviet Union. Others wondered if it was another country.

With the suspicion, The Air Force quickly launched what was then known as Project Sign. This would be followed by other investigations, Project Blue Book is one of them.

Project Sign was the initial response, but it only lasted for just over a year. At first, it appeared as if The U.S. Air Force were trying to actually discover what the unidentified flying objects were. Project Sign was actually taken somewhat seriously.

According to the report of a captain of the U.S Air Force, Captain Edward J. Ruppelt, the intelligence specialists at the Air Technical Intelligence Center (ATIC) were so confident of getting answers to the UFO problem within a year at most.

(By the way, you might want to keep the name of Captain Edward J. Ruppelt in mind, because he would later become a Project Blue Book director and the author of a book titled “The Report on Unidentified Flying Objects”).

Back to Project Sign, the UFO problem that the intelligence specialists at ATIC were looking to solve had nothing to do with if these UFOs existed or not.It was more about where it is from. Could it be the Russians at work or should we really gaze into space for answers? Could these UFOs have come from some other planet?Their findings would cause an internal split inside the group. There were those who believed that the UFOs were indeed from outside the planet Earth, while there were others who maintained that it couldn’t be true.By the time the Project Sign ended, the official results were inconclusive. In their report, the flying saucers were neither confirmed nor denied.But that really wasn’t the end of it. A document was authored by the project in 1948, and the document was called “The Estimate of the Situation”.

This document was sent straight up the command chain of the U.S. Air Force. Ruppelt revealed that the majority of the specialists who worked on Project Sign were particularly impressed by one of the many reports of sightings.

This particular report was the Chiles-Whitted UFO Encounter on the 24th of July, 1948. This incident involved two pilots whose Douglas DC-3 airliner was almost hit by a torpedo-shaped UFO. Most of the investigators actually believed this incident was true.

The conclusion was that the level of technology that must have gone into such an aircraft could not have been realistic for either the U.S. or the U.S.S.R. The only logical explanation was that it was from another planet. This belief was stated clearly in the document. 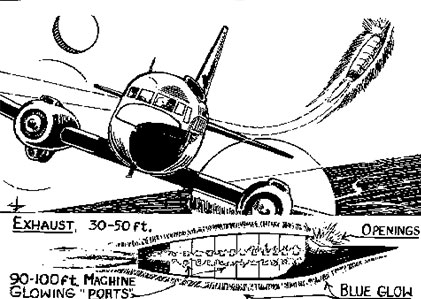 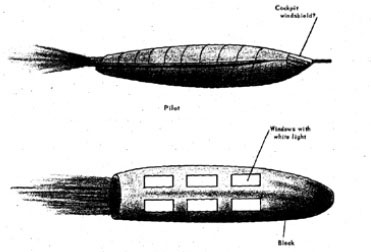 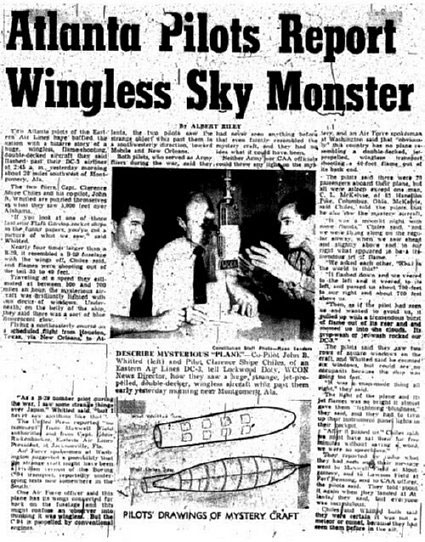 News article on report by C.S. Chiles and J.B. Whitted from Blue Book files. From 1951 through 1953 Captain Edward J. Ruppelt was chief of Project Blue Book — the official Air Force investigation into the UFO phenomenon.

But guess what, the document was rejected by the Air Force for lack of physical evidence. What’s more, all copies were ordered to be destroyed. The U.S. Air Force would later deny the existence of this document, even resisting any attempt to use the Freedom of Information Act in getting a hold of it.However, Ruppelt and several other sources confirmed the existence of this document. One of these sources was Dr. Allen Hynek. Dr. Hynek was a scientific consultant and UFO skeptic brought in to work on both Project Sign and Project Blue Book. His role and shocking transformation would be discussed shortly.But Project Sign wasn’t shut down to start Project Blue Book. There was another project in-between. This project is called Project Grudge.

Project Grudge is a fine example of how to appear productive when, in reality, you are busy doing nothing. Project Grudge was a total fluke set up with one single aim: debunk all reports and find natural explanations for those you can’t.

Needless to say, many of those “explanations” were completely illogical. Investigations were rarely conducted since the conclusion is already known. Any little investigation done was tailored to lead right back to the preconceived answer.

This continued until the UFO sighting reported around Fort Monmouth in New Jersey in September of 1951. A number of pilots and radar operators observed these fast-moving and highly maneuverable aircraft that are shaped like discs. It took a direct order by the head of Air Force intelligence at the Pentagon, Major General Charles P. Cabell, to swing the investigators into action.

When a meeting was called, it became clear that the investigators at Project Grudge had been taking all reports as a huge joke. This realization made General Charles P. Cabell push for the dissolution of Project Grudge and its replacement by Project Blue Book, the project intended to take the sightings really seriously.

With huge determination, Captain Edward J. Ruppelt (Remember him from Project Sign?) was put in charge of Project Blue Book, and work commenced immediately. It was Ruppelt that created the name Unidentified Flying Object (UFO) to replace the press-publicized “flying saucer.” Data were gathered and placed under high scrutiny. 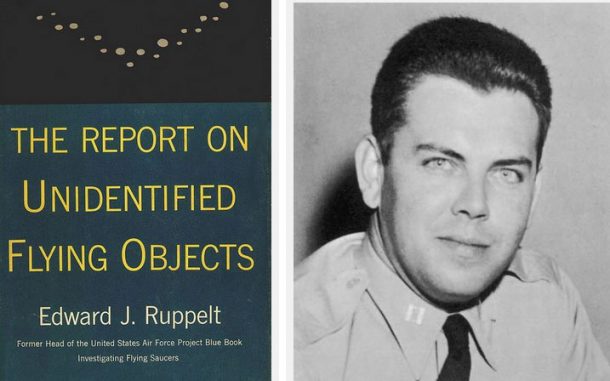 When the results of the study were released, it shocked the skeptics. A clean 22% of the 3200 reports studied were labeled as unknown. That means they couldn’t be explained away. That is huge, and the report shook the beliefs of many.

One of such people is the Astronomer, Dr. Allen Hynek, who was hired as a scientific consultant during Project Sign and Also for Project Blue Book. He was a straight UFO skeptic who worked at the time in the Department of Physics and Astronomy at Ohio State.

He had treated the whole thing has an utterly ridiculous fad that would go away soon enough. He would try debunking any of the sightings, claiming that there was surely a natural explanation. Sometimes, he would even find a ridiculous explanation, like one of his declarations in 1966 that left many people laughing.

After observing and conducting research for years with no easy explanation for some of what he personally saw and heard, Dr. Allen Hynek would later conclude that, indeed, these were not fads. The sightings of UFO were real and they point to something outside this planet.

This led him to become a passionate believer in what we now know as UFOs. He founded the Center for UFO Studies, wrote several books and was a technical advisor for “Close Encounters of the Third Kind,” an iconic film about UFOs released in 1977.

So, you would expect the Project Blue Book to gain international interest, right?Well, think again. What followed was as strange as the UFO sightings themselves.In 1953, Captain Edward J. Ruppelt, the director that had worked hard since the previous year to get out the report suddenly left the project. What was left of Project Blue Book was a shadow of itself, a device used for public relations.Earlier in 1952, a panel of scientists had been convened by the CIA. After meeting for 12 hours over a period of 4 days, the reports worked on by Captain Edward J. Ruppelt, Dr. Allen Hynek, and many others were brushed under the carpet.

The idea was that, if given enough time, all those sightings could be explained away.

The motion of the meeting was switched to calming down the public. A public relations campaign was proposed to debunk and remove the “aura of mystery” from the UFOs, all in an attempt to take away the public’s attention.

Project Blue Book was stripped of most of its power and resources and was transformed into a debunking device. Of course, this frustrated Captain Edward J. Ruppelt, thus making him to leave.

When Major Robert J. Friend tried to resuscitate the project years later, he got little cooperation and even more limited budget.

Everything went downhill from there. In 1969, Project Blue Book was terminated and its file declassified.

But the damage has been done. Many reports have been debunked by the project after Rupelt left. Other documents related to UFO which were not held by the Project Blue Book still remain classified, despite pressures and lawsuits from private UFO groups.

The later mission of Project Blue Book seemed to work more than the former.

While the U.S. Air Force would secretly continue their investigation, the public stance still remains.

Once again, the public is kept in the dark.