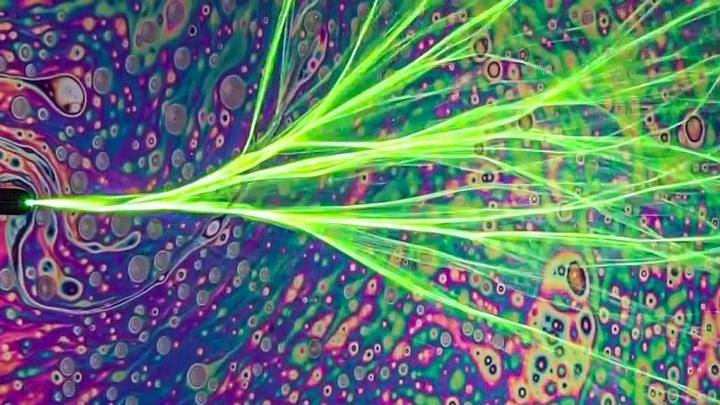 Another scientific experiment that tests the hermetic correspondence principle … as above …

Imagine in your mind the delta of a river, the way the main channel branches into streams and tributaries. Now, Israeli scientists have observed for the first time how the same thing happens with visible light waves as they propagate through a certain medium.

This phenomenon is known as “branched flux,” and had previously been observed in the flow of electrons (electric current), in ocean waves, and in sound waves. But for this to happen certain conditions must be met: the structure of the medium has to be random, the spatial variations in the structure need to be greater than the wavelength of the flow and subtle variations have to occur as well.

In the visible light experiment, all that was required was a laser and a soap bubble, allowing Israeli physicists to reproduce the effect.

“No one predicted this would happen,” said Mordechai Segev, a professor of physics at the Technion Institute of Technology in Haifa and one of the study’s researchers.

By targeting a laser beam at the soap bubble, the researchers observed how the beam expanded along the surface of the soap membrane. When the soft white light passed through the membrane, the scientists were able to see changes in thickness, visible as the colors dividing the beam varied.

The secret is in the thickness

A soap membrane consists of a film of liquid trapped between two layers of surfactant molecules (eg detergent). The thickness of this film varies substantially, from about five nanometers to a few nanometers. These variations were what produced the colorful patterns in the soap bubbles of the experiment. Likewise, these disturbances were also able to deflect the flow of light, generating the ramifications.

It was certainly not an easy thing to do. The laser light must have shone between the two surfactant layers; something that physicists accomplished by inserting a fiber into the membrane to bend the film, or by matching an elliptical beam to a flat film.

“With this observation, we can think of a lot of new ideas. For example, using these lightweight branches to control the flow of fluids in the liquid, or to combine soap with fluorescent material and make the branches become small lasers. Or to use soap membranes as a platform to explore wave fundamentals,” Segev explained.

And the thickness of the film, researchers write, could allow branched flow in three dimensions, a phenomenon that remains within the field of the hypothesis and has never been observed in any context.

The experiment could also have an application for some aspects of Einstein’s most famous theory. “Thin soap films can be cast on a variety of surfaces to study branching flow in curved space, something closely related to general relativity,” they conclude.

The research has been published in Nature.

In this article:branched flux, light