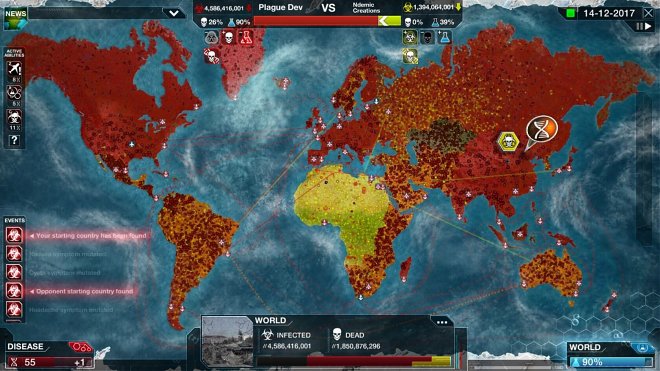 The creator of Plague Inc., James Vaughan, has confirmed the completion of a brand new game mode on COVID-19.

It was developed at the direct request of WHO and is intended to visualize measures and ways to save our world from a global pandemic. If previously the main plot of the game was built around the destruction of humanity by various diseases, now players are offered to try to save it.

Previously, the development studio Ndemic Creations has already donated funds to fight against coronavirus and has repeatedly requested permission from WHO to add an appropriate regimen to the game. But it did not receive approval because of the biased attitude of officials to the game itself. For example, in January, when, against the background of the epidemic in China, there was a stormy surge of interest audience to Plague Inc., its creators even had to make a reminder. Say, this is just a game full of conventions, and not a scientific simulator of a pandemic, so you do not need to transfer game realities to real life.

Today, the situation has changed diametrically, and at WHO they themselves are rushing developers with the launch of a new regime. It is created with the participation of experts from the organization and adds unusual and complex tools to the game. Such as organizing quarantine, checking traffic at the border, reformatting the work of social services, suppressing unrest, and other difficulties that real doctors face. It is hoped that the format of the game will be more convincing for millions of people who do not want to listen to what they are being called on from TV screens and media pages.

In this article:COVID-19, Plague Inc