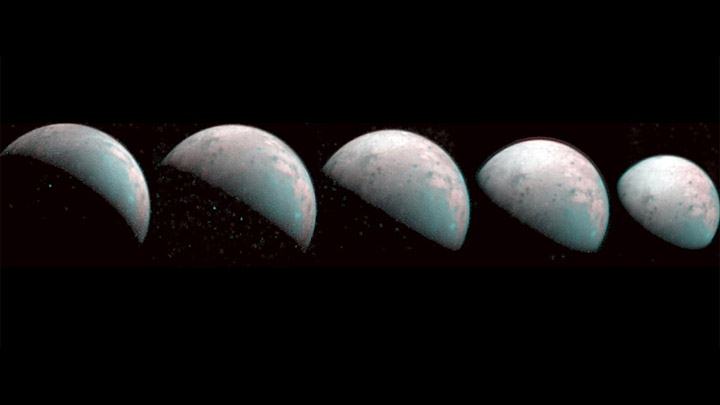 After four years of orbiting and observing Jupiter and its moons, the Juno probe still has some surprises in store for us. For the first time, he has photographed the north pole of one of the strangest celestial objects in the solar system: Ganymede.

Ganymede is truly amazing. It is the largest natural satellite of Jupiter and the solar system, as well as being the only one with a magnetic field. In order of distances to the planet, it is the seventh closest and the third of the Galileans, the first group of discovered objects that orbit around a planet. Its diameter is 5,268 km, 8% greater than that of Mercury, although it only represents 45% of its mass. It is 2% greater than Titan, the second largest natural satellite, and twice as massive as the Moon. . In absolute terms, it is the ninth largest object in the solar system and the largest without a significant atmosphere.

This moon is made up of silicates and water ice in roughly equal amounts. It has a cast iron-rich core and an inner ocean that can hold more water than all the Earth’s oceans combined – and even to harbor life.

Since Ganymede orbits Jupiter within the planetary magnetic field, the satellite’s magnetosphere is embedded in it as well. This creates impressive plasma waves as the particles – mainly electrons – accelerate along the complex lines of the magnetic field.

But this acceleration has another effect: auroras. Here on Earth, these particles are channeled into the polar regions, where they interact with atoms in the upper atmosphere to generate majestic light shows. Ganymede, however, has a negligible atmosphere, so a large proportion of the plasma falls directly to the surface of the satellite.

In the new published infrared images, taken by the JIRAM instrument (Jovian Infrared Auroral Mapper) of the Juno probe, the effect of this constant plasma rain is very clear. 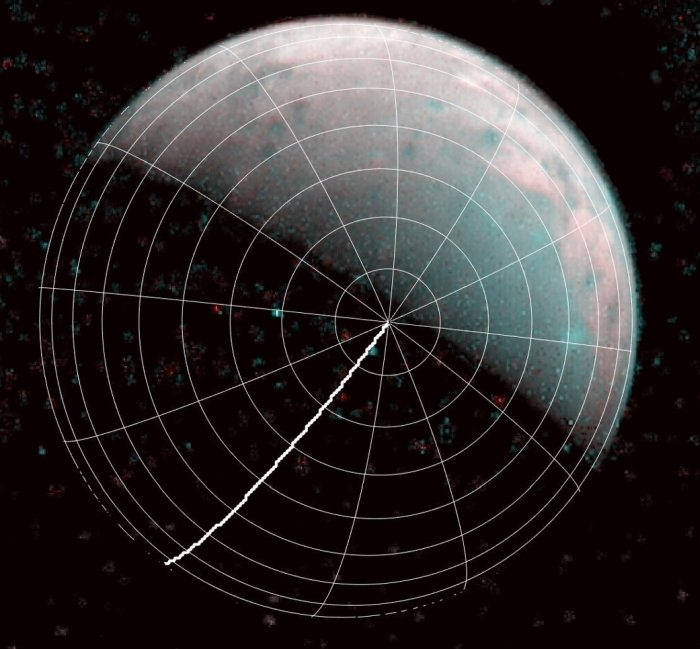 “The JIRAM data shows how the ice around the north pole of this moon has been modified by plasma precipitation,” explained planetary scientist Alessandro Mura, co-researcher at the National Institute for Astrophysics in Italy.

“It is a phenomenon that we were able to learn for the first time from Juno, who allowed us to see the North Pole fully.”

The ice at both Ganymede poles has a different infrared signature than that present at the moon’s equator. And analyzes have revealed that this is because the constant plasma rain has altered the very structure of ice crystals.

On Earth — and much of the Ganymede surface — the molecules in most of the ice are arranged in a highly ordered and hexagonal pattern. But under certain conditions, this framework can fall into a structural disorder. This disordered form is called “amorphous ice”; Something rare on our planet but very common in space (in grains of dust from interstellar clouds, comets, and ice bodies).

Three of Jupiter’s moons: Europa, Callisto and Ganymede, are icy; And, interestingly, they all have different profiles of their ices. Calisto’s is crystalline, Europe’s is amorphous, and Ganymede is a strange mixture.

Previous research found that this may have something to do with the proximity of the giant Jupiter; Europe is the closest, and is therefore subject to higher levels of radiation from the Jovian magnetosphere rings. Callisto is the furthest, and therefore receives less radiation.

Ganymede is in the middle, and scientists have suggested in the past that its magnetic field could channel radiation towards the poles, resulting in a higher concentration of amorphous ice at those locations. Now this has been validated through the data provided by Juno. The JIRAM team believes that the constant bombardment of charged particles in the polar regions prevents ice from forming crystalline structures.

Future observations could reveal more about this fascinating phenomenon. Juno’s primary mission is to observe Jupiter, but other missions are underway, including those of the JUICE orbiter (JUpiter ICy moons Explorer), to be launched in 2022 and whose objective will be to study not only Ganymede, but also Europe and Callisto.

Advertisement. Scroll to continue reading.
In this article:Jupiter, Plasma rain