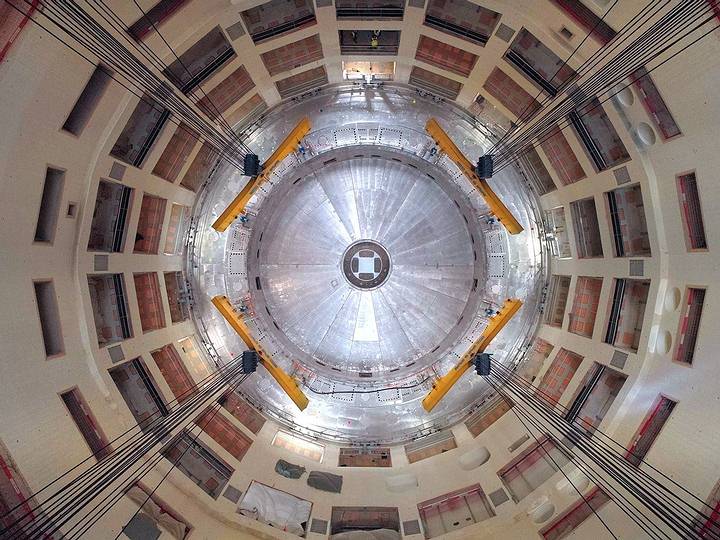 The world’s largest nuclear fusion project, which will try to replicate the Sun’s reactions and create a clean and unlimited source of energy, has begun to be assembled in France.

Located in Saint-Paul-lez-Durance, this project has the collaboration and financing of China, Europe, India, Japan, South Korea, Russia and the United States. Hence its name as International Thermonuclear Experimental Reactor (ITER). Its assembly will take five years and it is expected that by 2035 it will be working and showing that nuclear fusion is profitable.

Fusion energy works by colliding heavy hydrogen atoms to form helium, thereby releasing vast amounts of energy in the process, just as occurs naturally in the center of stars.

In stellar boilers, gravity is what contains the tendency of hydrogen-charged atoms to repel each other. Instead, at ITER, this will be accomplished by creating a ring of a charged, superheated gas called plasma, which will be held in place by magnets.

🏗👷 Assembly in Cadarache is expected to be over in late 2025.#energy #research #innovation #development @iterorg

For the same amount of fuel, fusion produces about four times the energy of a conventional nuclear power plant, which uses the reactions generated from the splitting of atoms, fission.

The “miracle” fusion uses accessible fuel and provides clean, cheap, and safe energy in return, with no radioactive waste or risk of a nuclear accident.

The ITER project was launched in 2006 and was among the plans to carry out its first tests this year, to achieve complete merger in 2023. However, since then it has faced several delays, mainly due to financial problems and, more recently – like most things this forgettable year 2020— obstacles typical of the COVID-19 pandemic.

“Clearly, the pandemic impacted the initial plan,” Dr. Bernard Bigot, CEO of ITER, said in a virtual conference to celebrate the start of the reactor assembly that took place last Tuesday (July 28). “No one on our team – located in Saint-Paul-les-Durance, northeast Marseille – has been infected with COVID-19.”

ITER’s central device, known as Tokamak, has a circumference of 30 meters and a height of around the same number. It is made up of more than a million individual pieces, which must be assembled with the precision of a Swiss watch.

“It is an enormously exciting phase of the project. Most of us come together to change the world, to make a big difference in how we provide clean energy to future generations. We all know that we need ITER to be successful,” he told the BBC Professor Ian Chapman, Executive Director of the UK Atomic Energy Authority.

“We hope to see the first plasma in five years. That will be just a short plasma, lasting a few milliseconds, proving that all magnets work. Then there will have to be a later stage of assembling other components… However, it is setting milestones on that path to demonstrate the merger on a commercial scale,” he explained.

If the project is successful, a second expanded version could be built to provide more power to the grid.

Advertisement. Scroll to continue reading.
In this article:ITER, unlimited energy