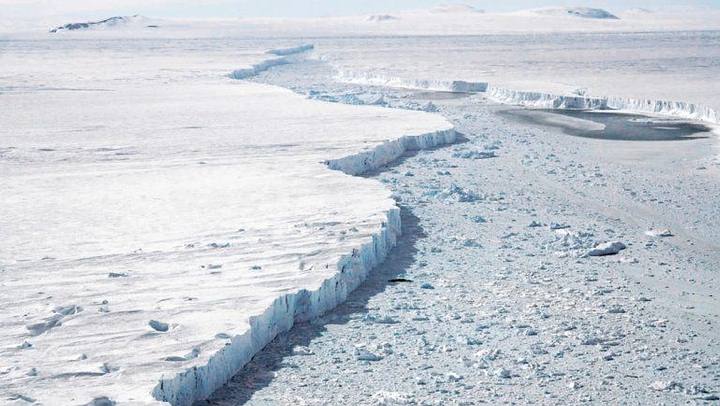 An iceberg, almost as big as the American city of Chicago, is about to part with the Larsen D ice shelf, which stretches along the eastern shore of the Antarctic Peninsula in the Weddell Sea.

According to a report by Adrian Luckman, a glaciologist at the University of Swansea (United Kingdom), the separation of this enormous fragment is “imminent”, and probably “will take with it a much larger surface area of ​​very old ice”.

Permanent ice is ice attached to the ocean floor or shore. Typically, it is located on ice shelves at the edges of the continents and does not move with winds or currents, as with other types of ice, according to the National Snow and Ice Data Center.

In this case, the platform from which the new piece of ice will depart is located south of Larsen C, remembered for having been the one from which an iceberg fell off twice as large as Luxembourg in 2017.

To reach this conclusion, Luckman surveyed the Antarctic ice with the Sentinel-1 satellites of the European Space Agency Program. These satellites use microwaves to produce images even during the Antarctic winter, allowing researchers to discover cracks in the ice up to about 9 meters wide. It also allows them to monitor speeds to identify possible iceberg separations.

“I saw the crack just a couple of weeks ago when it was just starting, and it has already traveled almost the entire distance to cause the separation,” the glaciologist told the magazine. Newsweek, specifying that the outcome will take place within one month.

However, he clarified that it will be a small and natural separation and that it is unlikely to produce any significant event.

“The separation of small pieces like this is a natural part of the ice shelf separation cycle and there is no evidence available to indicate that this event was precipitated prematurely. On the other hand, ice shelves along the Antarctic Peninsula have been losing surface at a faster rate in recent decades as ocean and atmospheric warming has increased, “he concluded.