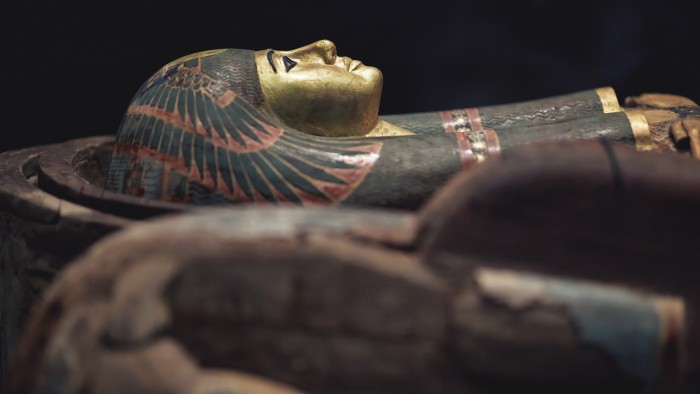 Scientists have written an entire book about a wealthy young woman who died in Thebes 2,600 years ago.

How was she found

If it were not for Napoleon’s ambitions, we would probably never have learned about this story and in general archaeologists would not have made so many amazing discoveries now. It was during the Egyptian campaign (1798-1801) that the Commission of Arts and Sciences was established to accompany Bonaparte, and the Institute of Egypt was soon opened in Cairo. The trade in mummies began. So they began to get to scientists from different countries.

And in 1834, an Irishman named Thomas Greg bought the sarcophagus with the woman’s mummy and donated it to the Natural History Society of Belfast. The following year, the coffin was opened in the presence of the famous scientist Edward Hincks.

Interestingly, he was a priest – and at the same time an outstanding explorer of the Ancient World. He knew the language of the Sumerians, was one of the first in the world to decipher the Akkadian cuneiform. But his “first love” was the ancient Egyptian hieroglyphs.

It was Hincks who was asked to read what is written on the sarcophagus. And he read that a woman named Kabuchi is buried in this coffin (although it later turned out that she was actually Takabuchi), that she was the “mistress of the house”, her father was called Nespar, he was a minister of the temple of Amun, and her mother’s name was Taseniret.

Then scientists found that Takabuchi had perfect, perfectly healthy teeth, she was about 1 meter 55 centimeters tall and she was 25-30 years old. There was no doubt that this was a dignified person.

The researchers also noticed her golden blond curly hair. Although later they came to the conclusion that the curls acquired this color over the past millennia, and during the life of this woman they were chestnut. Analysis of hair samples showed that she was of Caucasian race.

After research, the mummy was wrapped in the best Irish linen, and it has been resting in it ever since. Nothing more could be found out.

Finally, a few years ago, Takabuchi was investigated using the most modern methods: they carried out computed tomography, radiocarbon analysis, took X-rays – and they discovered so much new that it was enough for an entire book.

It was composed of a whole team of scientists led by Professor Rosalie David of the University of Manchester and her colleague Eileen Murphy from Queen’s University Belfast.

About 2,600 years ago, to be more precise, in the 660s BC. These were the times when Ancient Egypt was split into several kingdoms and the local aristocracy ruled everywhere.

For example, in the VIII century BC, the state had five rulers at once. And foreign policy suffered from this: the disintegrated country began to lose its foreign possessions and, in general, turned out to be weak in the face of an external enemy.

Just in the 660s-650s (we repeat – BC) the era of Ethiopian rule ended: the last representative of the Ethiopian (XXV) dynasty, Tanuatamon, did not even have time to officially become a pharaoh: he was only trying to regain the power lost by his predecessor, but in the end he too lost the battle with the Assyrians.

However, Tanuatamon was buried with all royal honors. But power passed to the Assyrian ruler Psammetichus I, who united the scattered Egypt under his rule.

Where did she live

In Thebes, this magnificent city stood on the site of modern Luxor – on the east bank of the Nile. For centuries, it remained the capital of Ancient Egypt, and during the life of Takabuti, the final decline of the city falls: the Ethiopian rulers abandoned it, did not care about keeping an army in it, and in the end Thebes were defenseless. The Assyrians captured and plundered the city.

Cause of death: murder

A fatal wound remains over Takabuchi’s shoulder. According to Egyptologists, she tried to escape, but in the end she was killed with a stab in the back.

At first, it was assumed that it was a knife. But now, upon closer examination, they came to the conclusion that the killer had something larger and heavier in his hands. Namely, an axe with a semicircular blade 7–7.5 centimeters long. Scientists say the blow was so powerful that death occurred almost instantly.

“It’s partly comforting to know that Takabuchi’s death, while violent, was quick and probably didn’t last long.” But the ancient Egyptians often lived to middle age, so her death at such a young age is tragic. We worked so much with her that it’s hard not to sympathize with her as a person, – Rosalie David said.

What else of interest found

It is not entirely clear whether we are talking about the Egyptian population of the 7th century BC or the 21st century. The fact is that the modern Egyptian population is the Arabs, and they, as you know, are not the descendants of the ancient Egyptians. In any case, scientists drew attention to her European genes.

“The surprising and important discovery of her European heritage sheds a mesmerizing light on an important turning point in Egyptian history, ” said a professor at the University of Manchester.

Secondly, she had not just beautiful teeth – there were not even 32, but all 33. It is noted that 0.02% of all people on Earth have such a feature.

Thirdly, in 2020 it was reported that she also has an extra vertebra, which is also very rare.

And fourthly, she has a heart. Computed tomography showed that it is in its place and is also relatively well preserved.

Recall that the ancient Egyptians left the heart in the body of the deceased. They believed that they would be weighed. And if it is too heavy, it means that the person has done too much bad, and then the heart will be thrown to be devoured by the demon Ammit.